Love is a Number by Lee Monroe, published by Hodder Children's Books on 4th July 2013

Goodreads synopsis:
When her beloved boyfriend Huck dies, Eloise is wrecked. All she has left of him are the texts that he sent: short, succinct - but full of love.

They keep Huck alive. And so Eloise texts him back as if he can receive her messages from beyond the grave. She never expected to get a reply ....

Dan is travelling South America in one last hurrah before university and real life kick in.

He's ready for love, but not of the casual kind. He's not met a girl that's set his world alight. But he's ready for her when she decides to make an appearance. One night on his travels, Dan discovers an abandoned phone.

He pockets it, then forgets about it. He never expected it to ring .... 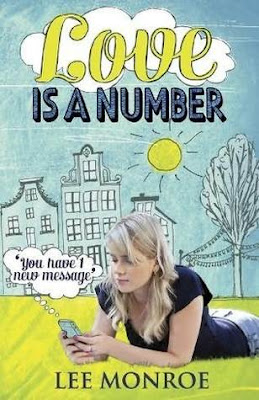 Review:
Being a big fan of Lee Monroe's Dark Heart trilogy, I was excited to see that she had a new book out.  Rather than focusing on the paranormal, 'Love is a Number' is a contemporary young-adult story about two teenagers whose lives are set on a collision course due to a series of unexpected events.  I was expecting something different to Monroe's previous work and that's exactly what I got.

The narrative alternates between the two main characters: Eloise or Lo as she is known and Daniel.  We find out at the beginning of the story that Eloise's boyfriend Huck has died.  She is trying to pick up the pieces of her life again but can't seem to dig herself out of the depression that she's sunk into following her loss.  I kind of had a love/hate relationship with Eloise.  I sympathised with her predicament and the difficult time she was going through, but as I began to learn more about her I didn't particularly like what I discovered.  She has allowed herself to be steered through life by her mother who goes as far as to choose her clothes and who she should be friends with, but up until this point she hasn't ever really stood up for herself.  It was nice to see her gradually becoming more independent and doing what she feels is right rather than what people tell her to do.

Daniel is in Spain and trying to open himself up to new experiences before he starts university.  I thought he was a great character and had a very appealing personality.  As he begins to mature as a person, so many good qualities about him shone through and I thoroughly enjoyed the chapters which centred around him and his journey.

I did think that the story was a little bit predictable at times.  It was slow to start but it picked up in the second half when I became more engrossed in the events surrounding the characters.  It's not hugely heavy on romance but is more about finding yourself and making true friendships which will last through life.

Although this is probably a book that I wouldn't pick up to read again, it was still a nice, sweet read which will appeal to fans of contemporary YA.