Review: Fire With Fire by Jenny Han and Siobhan Vivian

Fire With Fire by Jenny Han and Siobhan Vivian, published by Simon and Schuster on 26th September 2013

Goodreads synopsis:
Lillia, Kat, and Mary had the perfect plan. Work together in secret to take down the people who wronged them. But things didn’t exactly go the way they’d hoped at the Homecoming Dance.  Not even close.  For now, it looks like they got away with it. All they have to do is move on and pick up the pieces, forget there ever was a pact. But it’s not easy, not when Reeve is still a total jerk and Rennie’s meaner than she ever was before.

And then there’s sweet little Mary…she knows there’s something seriously wrong with her. If she can’t control her anger, she’s sure that someone will get hurt even worse than Reeve was. Mary understands now that it’s not just that Reeve bullied her—it’s that he made her love him.

Eye for an eye, tooth for a tooth, burn for a burn. A broken heart for a broken heart. The girls are up to the task. They’ll make Reeve fall in love with Lillia and then they will crush him. It’s the only way he’ll learn.  It seems once a fire is lit, the only thing you can do is let it burn... 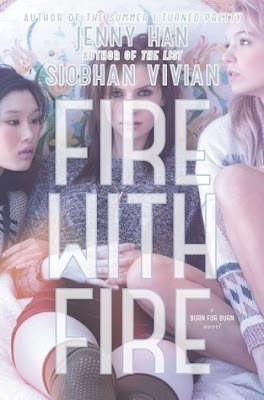 Review:
'Fire with Fire' is the second book in the trilogy about three teenage girls out for revenge.  The story follows on from last year's sensational 'Burn for Burn' which first introduced Jar Island and the main characters Kat, Lillia and Mary.  This series makes for deliciously addictive reading.  I was going through a bit of a book slump but as soon as I picked this up I found it impossible to put down.  There is a slow burn throughout the book which draws you in as the drama builds up and you realise that these girls will stop at nothing to get their revenge on Reeve.

The chapter perspective alternates between each of the three as their new plan takes shape and begins to unfold.  In the previous book, my favourite character was Kat, but this time around I liked Lillia a lot more.  I felt like I gradually began to understand more about her and her motivation and new facets of her personality shone through as the story progressed.  She is incredibly loyal to her friends and is determined to help Mary get payback on Reeve.  It was nice to see her grow in confidence as she begins to stand up for herself and find her own feet rather than just being known as the best friend of Rennie.  There were quite a few other characters in this book that I had previously not been too fond of but who made me change my mind about them this time around, in particular Reeve.  I actually felt quite sorry for him at times as he begins to lose everything he cares about.

There is a jaw-dropping twist near the end that I definitely did not see coming.  I won't say too much about it because I don't want to give anything away but wow!  It made me go back and rethink everything that had happened and I'm honestly still trying to get my head around it now.  Secrets are exposed and friendships are irrevocably altered as startling revelations come to the fore and lives are changed forever.

I'm desperate for 'Ashes to Ashes' now, which will be the next book in the series.  I can't even begin to guess what twists and turns will happen on Jar Island next as the drama and tension hots up.