The 100 by Kass Morgan, published by Hodder and Stoughton on 29th August 2013

Goodreads synopsis:
An epic journey from the depths of outer space to a wild, futuristic Earth

In 3010, humanity lives in city-like spaceships orbiting far above Earth's toxic atmosphere. No one knows when, or even if, the planet will be habitable again. But faced with dwindling resources, government leaders know they must reclaim their homeland . . . before it's too late.

Now a hundred juvenile delinquents are sent on a high-stakes mission to re-colonize Earth. After a brutal crash landing, the teens arrive on a savagely beautiful planet. Confronting the dangers of this rugged new world, they struggle to form a tentative community and to get over their dark pasts. In order to survive, they must learn to trust - and even love - again. 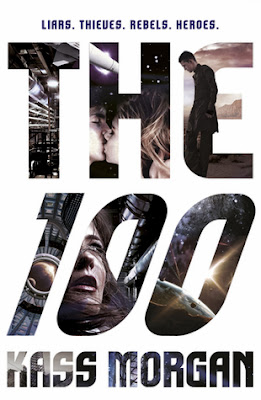 Review:
'The 100' is a sublime combination of science fiction and dystopia, interlaced with hints of romance.  This was an absolutely stunning read which I thought was superb from start to finish.  I already can't wait for the sequel and the spin-off TV show which has already been commissioned.

Set in the future, the 100 refers to a group of teens, all convicted of various crimes and misdemeanours who are sent to earth to recolonise the planet after a nuclear war.  The war led to the human race living in spaceships far above radioactive earth and learning how to survive by a number of methods, including limiting the number of new lives allowed to be created.  The plot was fantastic.  It was fast-paced, exciting and gripping and I was never sure what was going to happen next, so I was intrigued the whole way through.

The book features a four person perspective which alternates each chapter.  The four main characters, Bellamy, Clarke, Wells and Glass, all have differing stories to tell and I was fully immersed in each of them.  I initially worried that I might struggle with the multiple points of view, but it actually worked tremendously well.  I loved the characters and thought they were all equally strong and interesting.  I liked the way they all intersected with each other and it will be interesting to see how their personalities develop in future instalments as they face continued adversity and new challenges.

Some of my favourite scenes in the book were those that took place on earth.  The characters experiences really shone through and I could feel their wonder and amazement as they experience things like a sunset, rain or birdsong for the very first time.

I was sucked into 'The 100' and by the second half I couldn't put it down.  Kass Morgan's writing is wonderful, the world she's created is amazing and I would definitely give this book top marks for it's sheer brilliance.