Resist by Sarah Crossan, published by Bloomsbury on 10th October 2013

Goodreads synopsis:
Resistance to the Pod Leadership has come apart. The Grove has been destroyed but so has the Pod Minister. Quinn, Bea and Alina separately must embark on a perilous journey across the planet's dead landscape in search of the rumoured resistance base Sequoia. Meanwhile the Pod Minister has been succeeded by his capricious daughter. Her brother, Ronan, is supposed to advise her, but his doubts about the regime lead to him being sent out of the Pod in search of Quinn. In a world in which the human race is adapting to survive with little air, the stakes are high. 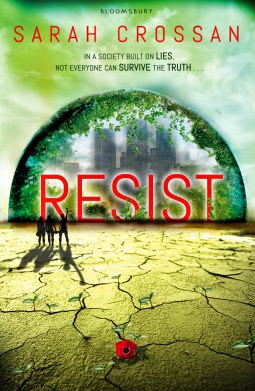 Review:
'Resist' is the sequel to 'Breathe' which I read last year and really loved.  I was very excited to see how Sarah Crossan's story was going to be concluded so picked this one up as soon as it arrived.

When I'm reading the second, third or fourth book in a series I do find it useful if the author provides a recap of characters and key plot points at the start.  Mainly because I read a lot of books and sometimes there's a large gap between books in a series being published.  This didn't happen in 'Resist' and I was plunged straight back into the story, so I did find it took me a little while to find my feet and remember exactly what had happened previously.

The story is narrated yet again by Bea, Alina and Quinn, but also by Ronan, the mayor's son.  I enjoyed the fact that there were multiple narrators, as it meant getting to understand different character's viewpoints and motivations but it did mean that the story jumped around quite a lot and just as I was getting engrossed in what was happening to one person, the perspective switched to someone else.  Yet again Bea was my favourite character and I enjoyed her sections of the book the most.  Brave, tough and determined, she never gives in and she, more than anyone else, seems to be at the heart of the story.

The message in the book comes across loud and clear and is about not giving up, about fighting for a better future and about having hope, even when you're continually knocked down.  The characters have to face great adversity but they never stop trying and never give up the will to live.

The ending was touching and heart-breaking and beautifully concluded the story.  Make sure you have some tissues handy because you'll need them.

Sarah Crossan is definitely an author to watch and I'm already eagerly awaiting her next book.
Posted by Samantha (A Dream of Books) at 00:00