Blinded by the Light by Joe Kipling, published by Cillian Press on 1st October 2013

Goodreads synopsis:
In the near future, when the world's population has been decimated by disease, the fortunate few live inside the Boundary, while the unlucky ones are left to die on the Outside. MaryAnn is one of the privileged. It doesn't matter that her friends can sometimes be cruel or that the boy she likes just threw up on her shoes, it's all about being noticed at the right parties. But it takes a single event to rip her life apart.

Struggling with physical and psychological scars, MaryAnn must face up to the truth about the foundations of the Neighbourhood and the legacy of her family. Once she learns the truth she can never go back, but can she really put her faith in the Union? 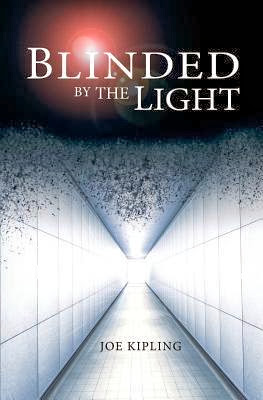 Review:
'Blinded by the Light' is a dystopian young-adult novel, written by a British author.  The first book in the Union trilogy it paints a bleak portrait of a future society which has been decimated by disease, leading to the formation of the Boundary.  The latter has been set up to protect the people within it from the Echo who are feared by all.

The main character MaryAnn lives inside the Boundary with her parents.  She's an Alpha - safe, well looked after and privileged.  She always has enough synthetic food to eat, she's free from disease and is luckier than many of the Delta who hold menial jobs in society.  At the start of the book I really wasn't sure about whether it was going to be for me because so many of the characters came across as quite unlikeable.  As I read on, I was sucked in by the story but sadly never really became a big fan of MaryAnn and her friends and family.

Everything changes for MaryAnn when her parents are killed by a bomb.  Trying to cope with her devastating loss, she goes to live with the Director but only begins to discover the truth about events when she comes into contact with her brother Daryl.  I thought the plot was great.  I'm a big fan of dystopian fiction and I enjoyed the idea for 'Blinded by the Light'.  The world building in the book was excellent and it was interesting to read about a world where the residents live within a protected barrier, believing they are being kept safe from outsiders.  The truth is something altogether different and I thought the way that Joe Kipling gradually revealed this was done brilliantly.

I felt like the book was let down slightly by some of the dialogue and by the fact that it was hard to feel real sympathy and understanding for some of the characters.  There are hints of romance between MaryAnn and Peter but I suspect that this is going to be developed more in later instalments of the series.

There are some interesting questions raised in the book and it puts forward ideas about good and evil which show that this isn't always completely clear cut.  I enjoyed the opening instalment, even though not everything came together completely for me and I'm looking forward to reading the rest of the series.