The Trap by Andrew Fukuda, published by Simon and Schuster on 1st November 2013

Goodreads synopsis:
After barely escaping the Mission alive, Gene and Sissy face an impossible task: staying alive long enough to stop an entire world bent on their destruction. Bound on a train heading into the unknown with the surviving Mission girls, Gene, Sissy, David, and Epap must stick together and use everything they have to protect each other and their only hope: the cure that will turn the blood-thirsty creatures around them into humans again. Now that they know how to reverse the virus, Gene and Sissy have one final chance to save those they love and create a better life for themselves. But as they struggle to get there, Gene's mission sets him on a crash course with Ashley June, his first love...and his deadliest enemy. 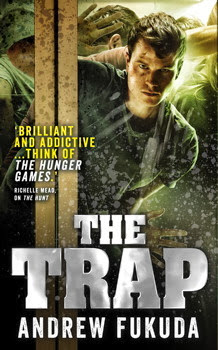 Review:
'The Trap' is an epic and exhilarating conclusion to one of the best series out there!  I was on the edge of my seat as I followed Gene and Sissy's struggle to save the ones they love and survive in a world riddled with danger.

I have loved each instalment but I think this was my favourite so far.  It was an incredible, pulse-pounding read which I devoured in one sitting.  The story takes up where 'The Prey' left off, with Gene, Sissy and co on-board a train headed towards an uncertain fate.  As they face unimaginable horrors, they vow to stick together no matter what but someone from Gene's past has other ideas.

The plot rockets along at full speed ahead, as Gene and Sissy find themselves in one dangerous situation after enough.  Having followed their journey this far and having invested so much in the characters I was desperately keeping my fingers crossed for them.  They've faced such terrible situations that I really wanted them to come out the other side and have some hope for the future.  They have a lot to get through first though before that's even a possibility.

Andrew Fukuda is an incredible writer.  The scenes in the book leap off the page as his writing leads you on a journey full of horror, terror and danger.  There are some wonderfully rich descriptive passages in the book which made everything feel very real and frankly left me quite terrified at times.

I was preying that the ending would leave me satisfied and wow, did it ever!  There was a truly unpredictable twist near the end which was jaw-dropping and so, so clever.  I never saw it coming which made it all the more surprising.  Sometimes the last book in a series can let you down but 'The Trap' delivered right up to the last page.

This was a real page-turner that I can guarantee you won't be able to put down.  I'm excited to see what subject Andrew Fukuda will turn his hand to next.