United We Spy by Ally Carter, published by Orchard Books on 5th September 2013

Goodreads synopsis:
Cammie Morgan has lost her father and her memory, but in the heart-pounding conclusion to the best-selling Gallagher Girls series, she finds her greatest mission yet. Cammie and her friends finally know why the terrorist organization called the Circle of Cavan has been hunting her. Now the spy girls and Zach must track down the Circle’s elite members to stop them before they implement a master plan that will change Cammie—and her country—forever. 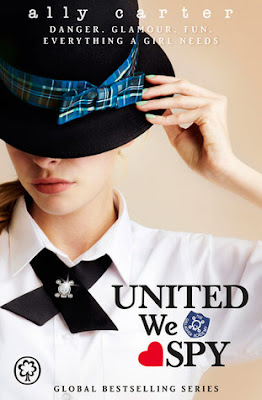 Review:
'United We Spy' is the sixth and final book in the Gallagher Girls series.  I was desperate to read it because I love these books but also wanted to savour every page because it was sad saying goodbye to such fantastic characters and such an amazing world.  If I could have picked any school to attend then it would have been the Gallagher Academy because the girls are so much more than just school friends, they are sisters as well.

Cammie, Bex, Macey and Liz are still intent on hunting down the members of the Circle of Caven when they discover a terrible truth.  Much of the story is focused on their attempt to avert catastrophe as they try to save the world and each other.  These girls have come a long way since the series first began.  They've always been clever, ingenious and brave but their talents have now been honed and their determination is off the chart.  Cammie in particular has really grown over the course of the series.  She has faced some terrible things and is still haunted and scarred by what has happened to her but she never loses track of the end goal and won't rest until the Circle has been dealt with once and for all.  I love the darker tone that the later books have had and the fact that everything is on the line for Cammie and her friends and family.

'United We Spy' is a thrill-ride of a story and a fitting end to what has been an amazing series.  Exciting and compulsive reading, I was hooked and couldn't bear to put this book down.  Not even for a second!  Danger lurks at Cammie's heels as she puts into action all the training she's received over the years.  Instead of surviving on her own, I like the fact that we get to see all the girls working together like a well-oiled team.  They all have different strengths but they bring out the best in each other and never lose faith in their abilities.
I really don't know what I'll do without any more Gallagher Girl adventures.  I love this series and I'm going to miss Cammie and Zach and all their friends so much.  I wonder if Ally Carter could be tempted into writing a spin-off somewhere down the line about their new careers.  I would be the first in line to read about that!