Review: Because It Is My Blood - Gabrielle Zevin

Because It Is My Blood by Gabrielle Zevin, published by Macmillan Children's Books on 19th August 2013

Goodreads synopsis:
Since her release from Liberty Children's Facility, Anya Balanchine is determined to follow the straight and narrow. Unfortunately, her criminal record is making it hard for her to do that. No high school wants her with a gun possession charge on her rap sheet. Plus, all the people in her life have moved on: Natty has skipped two grades at Holy Trinity, Scarlet and Gable seem closer than ever, and even Win is in a new relationship. But when old friends return demanding that certain debts be paid, Anya is thrown right back into the criminal world that she had been determined to escape. It's a journey that will take her across the ocean and straight into the heart of the birthplace of chocolate where her resolve--and her heart--will be tested as never before. 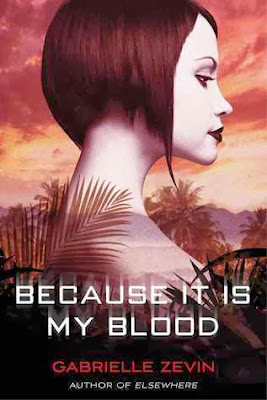 Review:
It seems ages since I read the first book in this series about Anya and her family.  I couldn't wait for the sequel and I'm pleased to say that it was just as enjoyable as the opening instalment was.

Anya has been released from Liberty Children's Facility and is finally able to re-join her family.  She wants life to go back to normal but everything around her seems to have changed.  Anya is a fantastic main character.  I admire her strength and courage and her determination to do whatever is best for her family and friends even if it means she may suffer as a consequence.  She will go to any lengths to protect her sister Natty and brother Leo and sometimes has to make incredibly difficult choices to ensure they remain safe.

Her romance with Win is one of my favourite things about the books.  He seems to understand her in a way that no one else does and even when she questions his feelings for her, there's no doubt in my mind that he would do anything for her.

Throughout the book Anya learns more about the Balanchine chocolate business and about the tangled web of relationships that lie behind it.  Up until this point she has almost been like a pawn in a bigger game but now she seems ready to step up and take her rightful inheritance.  Half-way through the story she ends up in Mexico learning how to farm cacao and this leads to a whole new cast of characters who I enjoyed reading about.

'Because It Is My Blood' was such an enjoyable read and a great book two.   I really love the Birthright world and I became completely immersed in the character's lives.  The only problem now is the long wait to find out what happens next!
Posted by Samantha (A Dream of Books) at 00:00