The Naturals by Jennifer Lynn Barnes, published by Quercus on 7th November 2013

Identified by the FBI as uniquely gifted, Cassie is recruited to an elite school where a small number of teens are trained to hone their exceptional abilities.

For Cassie, trying to make friends with the girls, and to figure out the two very different, very hot boys, is challenging enough. But when a serial killer begins recreating the details of her mother’s horrific crime scene, she realises just how dangerous life in The Naturals could be... 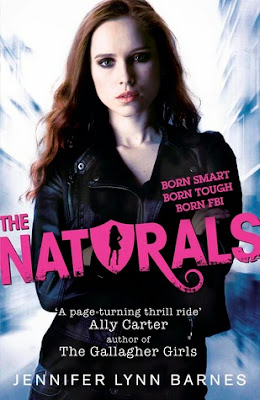 I was slightly taken by surprise after reading this book.  I thought it was going to be good because I'm a big fan of Jennifer Lynn Barnes's writing and I know she always comes up with brilliant stories but 'The Naturals' was absolutely superb and hugely gripping.  I'm thrilled that this is only the first book in the series because I can't wait to read more about the characters and find out what happens to them next.
In recent months I've become slightly hooked on crime and mystery novels because they are so engrossing and I enjoy trying to solve the cases along with the characters.  I therefore loved the premise of this book which centres on teens with special abilities who work for a secret FBI programme.  It reminded me a little bit of The Body Finder series by Kimberly Derting, so if you enjoyed those books, then I would definitely recommend giving 'The Naturals' a try.
﻿
The main character Cassie is a Natural.  She has the ability to profile people, putting together a psychological profile of even complete strangers and this talent leads her to join a special team put together by the FBI.  She, along with other teens who have similar abilities, help to solve cold cases.  She has an ulterior motive too, in that she wants to discover more about her mother's murder and hopefully track down clues to the killer.  There's a real sense of danger throughout as the killer turns the tables on Cassie and she becomes the hunted rather than the hunter.
One of the things which really helped to make the book stand out for me, was the authenticity of detail which Jennifer Lynn Barnes has woven into the story.  We get insights into how the FBI work, as well as the psychology of how the team attempt to understand the thoughts and motivations of criminals and killers.  I loved all of this and found it utterly fascinating.
A hugely enjoyable read which had me engrossed from the first chapter, I'm immensely looking forward to the next book in the series.
Posted by Samantha (A Dream of Books) at 00:00