Eternity by Elizabeth Miles, published by Simon and Schuster on 10th October 2013

Goodreads synopsis:
The weather is mild in Ascension…but beneath the surface, everything is burning up. The nightmare Emily Winters has been living through for months shows no sign of ending, as the Furies stay on the peripheral, slowly driving her crazy. Em feels...different. She's angry, and never cold, and too strong. It's only a matter of time before she turns into the thing she hates the most. Em needs to take her fate into her own hands, but without Drea to help, or anyone to turn to, Em is quickly running out of options.

Crow's involvement with Em has grown more complicated, as his visions begin to take shape. It doesn't look good for Em, but Crow has a plan. He will do anything to save her. Anything. JD misses the Em he used to know...and love. She seems so different these days, like she's hiding something. When JD begins to learn the truth, he is as scared as he is determined to help her. But his help may be the last thing Em needs to survive. 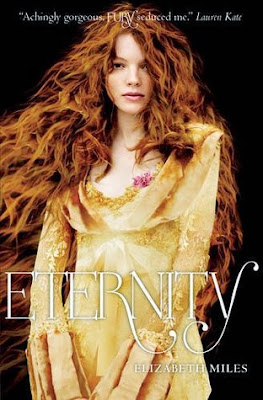 Review:
'Eternity' is the third and final instalment in the trilogy about Emily Winters and the small town of Ascension.  I thoroughly enjoyed the previous two books and I was looking forward to reading the conclusion of Emily's story but I wasn't quite as wowed by it as I'd been by 'Fury' and 'Envy'.  Maybe because the gap between reading this and the other books was too long, but it took me a little while to get back into the story and pick up all the threads of the character's lives.

Emily fears she's losing herself and becoming someone or something else.  She doesn't know how to break the Furies curse until JD begins to put all the pieces together and provides the smallest glimmer of hope that Emily might have a future after all.  The chapter point of view alternated mainly between Emily and JD.  They both still seem to be oblivious to their feelings for each other but this may be the one thing that can save them.

The story was pretty dark and twisty with life and death quite literally at stake but I couldn't help but feel that the Furies didn't come across as ominously as they had in the past.  Previously they'd been a malevolent presence in the town but they didn't seem to play such a big part in 'Eternity'.  They are still there to make Emily's life a misery but they didn't have such an active role in the book.

I have to say that I was also disappointed with the ending which felt rather abrupt and the big showdown, when it finally came, was something of a let down.  It seemed that Elizabeth Miles was trying to tie everything up too quickly and so the edge of tension went out of the story.

I think it may have helped if I'd gone back and read the whole series in one go but as I didn't, this final chapter in the series just didn't seem to live up to it's promise.  There were some aspects about it that I enjoyed and I was pleased to finally find out what was going to happen to Emily but overall I had high hopes for it which just weren't met.
Posted by Samantha (A Dream of Books) at 00:00