Goodreads synopsis:
It’s 1924. Leaving their beloved Beech Grove Manor to go to London for the season, Poppy and Daisy Derrington know that they must shine as debutantes.

Since a girl cannot inherit her father's estate, the sisters have to marry well or face being left penniless.

But it’s not money or marriage that interests them. It’s music, cinema, literature, fashion, parties, love – everything that is shiny and new. Trapped by the dusty traditions of their class, Daisy and Poppy must choose between family duty and the bright lights of the roaring twenties. 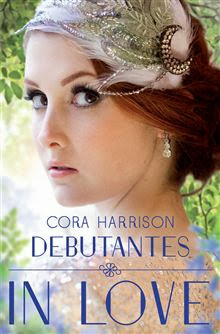 Review:
The second book in Cora Harrison's Debutantes series focuses on the two middle Derrington sisters, Poppy and Daisy, as they arrive in London for their debutante season.  I was a big fan of the first book about the Derringtons and their home Beech Grove Manor, as it reminded me of some of my favourite books when I was growing-up by Noel Streatfield.  It had the same charm and easy manner about it which always appealed to me, plus I adore books about large families and sisters in particular.

The story is set in 1924 and so we get the era of the roaring twenties.  Life and society are changing rapidly, with art, music and literature coming to the fore.  The book touches on the divide between duty and passion and between following the same well trodden path or carving out a new future, outside of the rigid confines of society.

Beech Grove Manor is left behind as much of the action takes place in London.  It was interesting to see how Daisy and Poppy functioned away from their more familiar surroundings and how they strived to build lives for themselves, while at the same time attempting to follow their dreams.  The focus is on affairs of the heart and while Poppy and her childhood friend Baz begin to explore a new dynamic to their friendship, Daisy worries that she must marry well to ensure the Derrington future.  Daisy has always been and continues to be my favourite character.  I love her passion for her film-making, as well as her dedication to her family and her struggle to balance both is at the heart of the book.

Cora Harrison is on to a winner with this lovely series.  The books are attractive on the outside and in and I'm wholeheartedly looking forward to the next instalment about the Derrington sisters.  I wonder if the time is approaching for Rose, the youngest of the siblings, to get her own story.