Goodreads synopsis:
In May 1980, fifteen-year-old Óscar Drei suddenly vanishes from his boarding school in the old quarter of Barcelona. For seven days and nights no one knows his whereabouts. It all began the previous autumn when, while exploring the dilapidated grounds of what seemed to be an abandoned house filled with portraits, he inadvertently stole a gold pocket watch. Thus begins Oscar's friendship with Marina and her father Herman Blau, a portrait painter.

Marina takes Óscar to the gardens of the nearby cemetery to watch a macabre ritual that occurs on the fourth Sunday of each month. At 10 a.m., a coach drives up to the cemetery and a woman with her face shrouded, wearing gloves, and holding a single rose is helped down from the coach and walks over to a nameless gravestone, where she sets down the flower, pauses for a moment, and then returns to the coach. The gravestone bears no marking but the outline of a strange-looking butterfly with open wings. On one of their subsequent walks Oscar and Marina spot the same woman and determine to follow her. Thereupon begins their journey into the woman's past, and that of the object of her devotion. 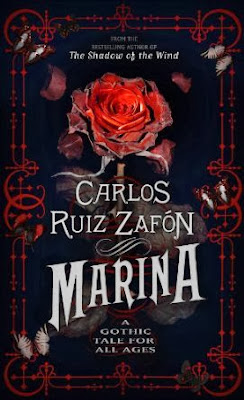 Review:
I've enjoyed several of Carlos Ruiz Zafon's adult books, particularly 'The Shadow of the Wind' which is a big favourite of mine.  I've also read quite a few of his books for young adults which have also been very good.  I'd heard of 'Marina' which is actually one of Zafon's earlier works and really liked the sound of it.  I normally enjoy Gothic stories but sadly, I struggled my way through most of this book.

The story is set in Barcelona in 1980 and is told through the eyes of main character Oscar Drai.  Oscar is a student at a local boarding school who one day inadvertently stumbles across Marina and her father Germain.  I thought the opening few chapters of the book were intriguing and made me want to keep turning the pages.  I actually felt that some comparison could be made with Dickens's 'Great Expectations' as Oscar and Marina reminded me initially of Pip and Estella.  However, then the story took a completely different turn and the elements of Gothic horror really came to the fore.

Within the book stories within a story are recounted by various secondary characters.  This continually added layers of mystery and intrigue which began to unravel as Oscar made it his mission to get to the bottom of events.

'Marina' is an incredibly creepy book.  It has one of the most frightening scenes in it I've ever read and the grotesque aspects of the story really put me off wanting to finish it.  I did persevere and I certainly do admire a writer who can be so versatile in writing about different subject matters but this one just wasn't for me.