Unbreakable by Kami Garcia, published by Simon and Schuster on 1st October 2013

Goodreads synopsis:
When Kennedy finds her mother dead, her world begins to unravel. She doesn't know that evil forces in a much darker world are the ones pulling the strings. Not until identical twins Jared and Lukas Lockhart break into her house and destroy a dangerous spirit sent to kill her. The brothers reveal that her mother was part of an ancient secret society responsible for protecting the world from a vengeful demon - a society whose five members were all murdered on the same night.

Now Kennedy has to take her mother's place in the Legion if she wants to uncover the truth and stay alive. Along with new Legion members Priest and Alara, the teens race to find the only weapon that might be able to destroy the demon - battling the deadly spirits he controls every step of the way. 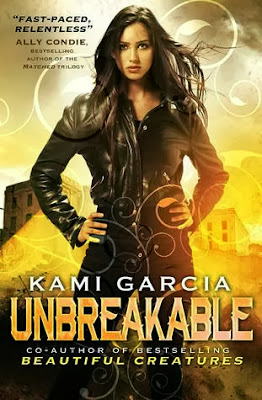 Review:
I was really excited about reading 'Unbreakable'.  I love the Beautiful Creatures series by Kami Garcia and her co-author Margaret Stohl, so I was pretty hyped about this first book in a new supernatural series by Garcia.  Because my expectations were so enormous, I felt a little let down when I actually finished the book.  Please don't think I didn't enjoy it, because I did, but it failed to completely win me over.  I still want to read the rest of the series as I feel that this was a promising enough start to make me want to find out what happens next, but I do hope the next instalment ramps things up a notch.

The plot centres on teenager Kennedy, who comes home one day to find her mother dead.  From this point on her whole world is turned upside down.  She discovers that her mother was part of The Legion, a group who protect the world from evil spirits and demons.  Taken under the protection of twin brothers Jared and Lukas Lockhart, she joins them and their fellow demon hunters, as they battle all kinds of evil.

After the opening of 'Unbreakable', the story hurtles along at breakneck speed.  There are some seriously creepy moments in the book and I wouldn't recommend reading this if you're alone in the house.  I was frankly terrified!  Be prepared for just about anything to come creeping out of the darkness when you least expect it.  I kept jumping out of my chair!

Although there's a lot going on, I thought that some of the character development perhaps suffered because of this.  I felt like I knew very little about the main character Kennedy before she's sucked into a whole new world, and I would also have liked more time to have been spent on developing Jared and Lukas.  The inevitable love triangle between the three of them didn't particularly draw me in, as I didn't care enough about either boy to root for one or the other of them.

I enjoyed Garcia's world building and I loved some of the action sequences but some aspects of the book just didn't work for me.  I will be intrigued to see how things progress but I'm yet to be completely sold on this new series.