Dangerous Boys by Abigail Haas, published by Simon and Schuster on 14th August 2014

Goodreads synopsis:
Three teens venture into the abandoned Monroe estate one night; hours later, only two emerge from the burning wreckage. Chloe drags one Reznick brother to safety, unconscious and bleeding; the other is left to burn, dead in the fire. But which brother survives? And is his death a tragic accident? Desperate self-defense? Or murder?

Chloe is the only one with the answers. As the fire rages, and police and parents demand the truth, she struggles to piece together the story of how they got there-a story of jealousy, twisted passion, and the darkness that lurks behind even the most beautiful of faces. 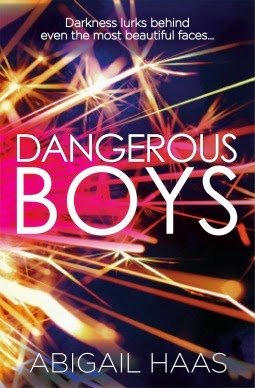 Review:
'Dangerous Boys' is the first book I've read by Abigail Haas.  It is a psychological thriller with a sinister undertone which I found really creepy and quite disturbing.  If you are a fan of stories like 'Before I Go to Sleep' by SJ Watson then you'll enjoy this book.

The plot revolves around the main character Chloe and the two boys in her life, brothers Ethan and Oliver.  It opens with a mystery surrounding them and sets up the intrigue from the reader from the very beginning.  It's key to remember however that nothing is what it seems in this book and that the characters and the story will seriously test your sense of judgement.  By the end, everything I had thought was completely turned on its head.

Chloe is desperate to escape her small town home and university seems like her ticket on to a better and brighter future.  Everything seems set until her mother begins to crack up and her father disappears from the picture.  It's up to Chloe to hold everything together as she begins to see all of her dreams going up in smoke.  That is until she meets Ethan and his older brother Oliver and suddenly everything she thought she knew about herself begins to change.  I wasn't particularly a huge fan of any of the main characters in the book but I enjoyed the way in which Abigail Haas explored the darker side of their personalities and relationships.  Love, jealousy and deceit are all prominent themes and each influences the decisions that the characters make.

The narrative switches back and forth throughout the book between Then and Now, the story unfolding gradually, layer by layer, as secrets and truths come to light.  I enjoyed all the twists and turns, although it's quite dark and pretty sinister and really made me shudder at times.

'Dangerous Boys' was a real page turner which made for a compulsive read.  I couldn't put it down even when I was stunned and shocked by each new twist in the tale.