Goodreads synopsis:
A catastrophic plan crash leaves one survivor: a girl with no memory.

Who is she?  Where does she come from?

Nobody knows and no one comes forward to claim her.

Haunted by a looming threat she can't remember and plagued by abilities she doesn't understand, she struggles to recall who she is. But every clue leads to more questions. And she's running out of time to answer them.  Her only hope is a boy who claims they were once in love.

Alone and on the run, who should she trust? And what if she discovers that she is safer with a past that stays unremembered? 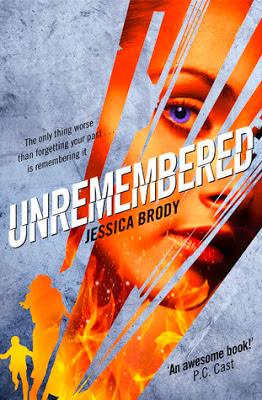 Review:
I was originally drawn to 'Unremembered' after I saw it described as a perfect read for fans of The Hunger Games, The Bourne Identity and Inception.  Being a big fan of all three, I had a feeling that this was going to be my kind of book and luckily I was right!  It has action, adventure and suspense in bucket loads, mixed with just a pinch of sci-fi and will, I'm sure, appeal enormously to readers who enjoy plenty of thrills and spills.  I finished it in one evening because it was so superb that I could not put it down.

The premise was intriguing from the start.  A girl survives a plane crash which kills everyone else on board.  Found floating in the middle of the ocean, she is rescued and taken to hospital.  However, when she wakes up, she has no memory of who she is and where she came from.  Taken in by a foster family, she struggles to make sense of everything around her and cannot provide people with any of the answers to the questions they keep asking.  That is until a strange boy tells her that he knows her and can reveal her true past.

The story is gripping and the plot complex.  I had to concentrate quite hard in the second-half to make sure that I didn't miss any crucial plot points.  I loved the fact that I had no idea what was going to happen next and I was kept guessing about the main character's true past, until the moment of the big reveal.  It's wonderful to be truly surprised instead of being able to predict the outcome of a book.  I can't say too much about the story itself because I'm so worried about giving something away, but needless to say it's absolutely brilliant and a very clever mind twister.

Jessica Brody has mixed lots of different genres together, from sci-fi, to romance, to action thriller, but it works brilliantly and there is something to appeal to everyone.  At times, I can get a little tired of books always being part of a trilogy, but for once I'm glad to say that there is still more to come in the series with 'Unforgotten' due to be published in 2014.
Posted by Samantha (A Dream of Books) at 00:00