Goodreads synopsis:
Talia fell under a spell . . . . Jack broke the curse.
I was told to beware the accursed spindle, but it was so enchanting, so hypnotic. . . .
I was looking for a little adventure the day I ditched my tour group. But finding a comatose town, with a hot-looking chick asleep in it, was so not what I had in mind.
I awakened in the same place but in another time—to a stranger's soft kiss.
I couldn't help kissing her. Sometimes you just have to kiss someone. I didn't know this would happen.
Now I am in dire trouble because my father, the king, says I have brought ruin upon our country. I have no choice but to run away with this commoner!
Now I'm stuck with a bratty princess and a trunk full of her jewels. . . . The good news: My parents will freak! 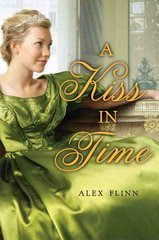 I'm posting both book covers because they're just so different.  The hardcover one is on the right and the paperback one on the left.  Which do you prefer?  I think I like the harcover because it's so much prettier and appealing.
Review:
'A Kiss in Time' is a modern, original-take on the classic fairytale of Sleeping Beauty.  I love books like this and the way that they weave something entirely new from a traditional story which is etched in so many peoples' minds.  Alex Flinn's interpretation of the tale brings it up-to-date in such a clever and inventive way.  I wish I'd thought of it!  The book starts off three hundred years ago, where Princess Talia is preparing for her sixteenth birthday, whilst continually being watched to ensure that she doesn't go anywhere near anything resembling a spindle.  When the inevtiable happens and she falls into a deep sleep, the story skips forward to the present day, where instead of a handsome prince, she's awoken with a kiss by hot guy Jack.
I really enjoyed the way in which the narrative alternated each chapter between Talia and Jack, so we got their own perspectives and views on the events that were happening.  Talia has to learn to cope in modern day America (which is hilarious!), while Jack unexpectedly finds himself with a princess in tow.  Although Talia starts off a little bit unlikeable (she's a spoilt princess after all), I found myself rooting for her in the end.  It's a testament to Alex Flinn that I never knew how the story was going to end.  After all, in 'Sleeping Beauty', the tale ends with a kiss but here it's only just beginning.
This was a sweet, funny book that I loved reading.  I can't wait to get stuck into 'Cloaked' and 'Beastly' next.  Flinn seems to have the perfect formula for the fairytale genre with a 21st century spin.
Posted by Samantha (A Dream of Books) at 14:10