Review: The Night of the Solstice - L.J. Smith

Goodreads synopsis:
In another age, the pathways connecting Earth to the Wildworld were sealed, forever separating humans from the shimmering parallel universe where legends still live. A great sorceress, Morgana Shee, guards the solitary gate between the worlds. She alone holds the secret of Fell Andred, her mansion built directly on the Great Coastal Passage, whose mirrors are the last doorways to enchantment.

Morgana’s familiar, a magical fox, embarks on a rescue mission, seeking out four special children to help save her mistress. Armed only with courage and determination, the four siblings – Claudia, Alys, Charles and Janie – must find their way through the last surviving paasageway to the Wildworld. But the crossing is only open for a single night during the Winter Solstice and time is running out… 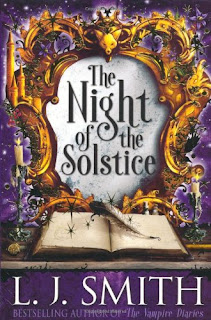 Review:
I liked this book but I didn't love it.  I came across it in the library a few weeks ago and as a big fan of L.J. Smith's Vampire Diaries series I thought it was about time I branched out and read some of her other books.  She seems to have a huge back-catalogue.  This is a re-release as it was originally published in 1987.  Even though this title is over twenty years old, it seems to have aged very well.  I do think that it would probably be more suited to a slightly younger teen audience though.

The story is very narnia-esque, cue four children who enter another world when they are tasked with rescuing a sorceress who is the only one capable of closing the pathways to the Wildworld before evil can be brought upon the earth.  The four children are pretty ordinary and unassuming but show their mettle and bravery when it is needed most.  They each have individual qualities that come into play throughout the story and work well together as a team.  I loved Alys, the oldest sister and Claudia the youngest.  I thought that Janie was a bit full of herself at times and the character of Charles could have been developed slightly more.  But I liked the fact that they stuck together and worked as a unit.

I loved the air of mystery surrounding the story and all the little challenges they had to go through and overcome before they could rescue Morgana.  I also liked some of the characters that they met along the way, including the serpent (loved him!) and the vixen, although it would have been good if the latter had been more involved.  The vixen didn't appear much except at the beginning and end of the book.

I think it only fell down for me because I adore the Vampire Diaries series and so I had quite high expectations for this which weren't quite met.  Saying that, this was still an enjoyable read and I shall be checking out the sequel called 'Heart of Valour' which is being re-published by Simon and Schuster in January 2011.
Posted by Samantha (A Dream of Books) at 12:55