Troubadour by Mary Hoffman, Published by Bloomsbury in 2009

Goodreads synopsis:
A story of persecution and poetry, love and war set in 13th century Southern France. As crusaders sweep through the country, destroying all those who do not follow their religion, Bertrand risks his life to warn others of the invasion. As a troubadour, Bertrand can travel without suspicion from castle to castle, passing word about the coming danger. In the meantime Elinor, a young noblewoman, in love with Bertrand, leaves her comfortable home and family and becomes a troubadour herself. Danger encircles them both, as the rising tide of bloodshed threatens the fabric of the society in which they live. 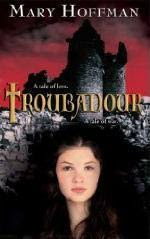 Review:
﻿I love historical fiction and reading about real-life events.  'Troubadour' is set in Southern France during the thirteenth century when the Cathars or 'True Christians' were persecuted by the Pope and burnt alive as heretics all across France.  Thousands of people were killed during the period from 1209 to 1229 as the Pope promised their lands to any Northern Frenchmen who would fight in the crusade against them.
Mary Hoffman has used this as a backdrop for the book and has woven a story about a troubadour called Betran, who travels across France spreading a message of warning to other Cathars, alongside a young noblewoman called Elinor who falls in love with him.  Elinor escapes her family after the threat of an unwanted marriage and seeks shelter disguised as a boy, with a group of minstrels who entertain noble families.  I thought Elinor was a great central character.  She wasn't afraid to take a risk to get what she wanted and she wasn't prepared to submit to a life of misery.  She's headstrong and brave, rebellious and fiesty and her central struggle is the one that helps to form the basis for the story.
I thought that the blurb for the book was slightly misleading because I was led to believe that there was going to be more romance between Elinor and Betran (I do love a generous dose of romance!) but it didn't really develop that way.  I think Mary Hoffman's idea was that Elinor has a childhood crush on Betran, which she eventually grows out of until she's ready to find real and everlasting love.  Also, as much as I enjoyed the really rich historical detail throughout the book, I did particularly love the scenes between all the characters and I would have liked a little more focus on the relationships between them.
There were a lot of historical terms and character names in the book but luckily there was a handy guide at the back which I consulted a couple of times to help me keep everything straight.
Rich in music, love and war, this was a really great read which has made me want to find out more about this particular period of history.
Posted by Samantha (A Dream of Books) at 10:58