Goodreads Synopsis:
Mae Crawford's always thought of herself as in control, but in the last few weeks her life has changed. Her younger brother, Jamie, suddenly has magical powers, and she's even more unsettled when she realizes that Gerald, the new leader of the Obsidian Circle, is trying to persuade Jamie to join the magicians. Even worse? Jamie hasn't told Mae a thing about any of it. Mae turns to brothers Nick and Alan to help her rescue Jamie, but they are in danger from Gerald themselves because he wants to steal Nick's powers. Will Mae be able to find a way to save everyone she cares about from the power-hungry magician's carefully laid trap? 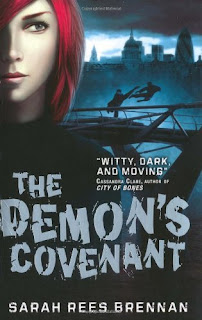 Review
This is book 2 in Sarah Rees Brennan's trilogy which began with 'The Demon's Lexicon' and will conclude in 2011 with 'The Demon's Surrender'.  The striking front cover was the first thing to attract me initially.  I love the picture of the girl's face with her red hair, half in shadow, with something lurking in the shadows behind her.  It's an attractive cover which really catches your eye.

One of the things I also loved about this book is the fact that it's set in my home city.  As I was reading, I kept coming across references to places, landmarks and sculptures that I walk past every day on my way to work and which certainly helped me to visualise the story even more clearly.  Sarah Rees Brennan must surely have spent some time in my home town!  I think this is actually the first book I've read that's set here which is pretty thrilling!  Also, the characters go to Tintagel which is one of my favourite places.  I almost felt like I was there right along with them.

In the first book Mae discovers that her brother Jamie is a magician.  He's in danger from the Obsidian Circle and their new leader Gerald, who want him to join them.  Mae's determined to do everything in her power to stop them, so she calls upon Nick and Alan for help, although they too are dealing with their own set of problems.  Unfortunately, Mae soon becomes embroiled in the affairs of the two brothers with potentially dangerous consequences.

One of the main things I did like, was the element of family which lies at the heart of the book.  Nick and Alan, along with Mae and Jamie, are siblings who would do anything to protect each other, even when they are pushed to their limits.  The bonds they share are stronger than any of the parental relationships featured or mentioned.  Interspersed throughout are excerpts from Alan's father's diary, reflecting on his son's childhood and relationship with Nick.  I particularly enjoyed these passages and I think they shed quite a bit of light on the characters of Alan and Nick and why they are so close.

'The Demon's Covenant' is fast-paced, dark and gripping.  The story was thrilling and exciting and I loved the whole idea of demons and magicians living among humans.  The only problem I had was that because I haven't actually read the first book, it took me a little while to pick up the whole thread of the story and what had happened previously to all the characters.  I don't really think it can be read as a stand-alone book because there are so many references to things that happened earlier in the series.  For that reason only, I found the start a little slow going but the pace of the story soon picked up and the climax comes at you head-on.
Posted by Samantha (A Dream of Books) at 12:42