Review: The Other Countess - Eve Edwards

Goodreads synopsis:
It's 1582 and eighteen-year-old Will Lacey's family is in trouble. After years of wasteful spending, his late father has run Lacey Hall to near ruin. Tasked with marrying his family back into fortune, the new Earl of Dorset is all set for a season at court to woo not just the Queen but potential brides with his jousting skills. But when Ellie – a strong-willed girl with nothing to her name but a worthless Spanish title – catches Will's eye, he faces a bigger battle than he could ever have anticipated. 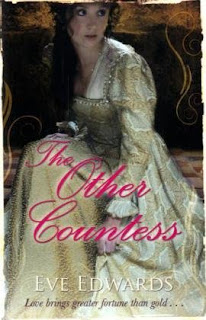 Review:
I'm a bit of a history buff so one of the genres I love reading is historical fiction.  I like being able to forget my surroundings and be transported back in time to a different era.  One of the things I loved about 'The Other Countess' was the rich descriptions and historical detail that Eve Edwards has skillfully intertwined around the story.  The setting is 1578 and we're treated to appearances by notable historical figures such as Queen Elizabeth, Walter Ralegh and Robert Cecil.  A great deal of time has obviously been spent on researching the tudor period which really shows in the detail and accuracy.  The whole period is evoked in the language, story and characters and I was absorbed completely.

Along with the real life figures are fictional creations, William Lacey Earl of Dorset and Lady Eleanor Rodriguez of San Jaime, known as Ellie.  The scenes between these two characters are what really made the book for me, particularly the way their relationship evolves in the latter-half.  I love all the sweet endearments he has for her - darling and love, and the way he's often there to give her support when she needs it the most.  I adored them!!  Some of the moments they shared made my heart start to pound!!

Although the story started off a little bit slowly, it soon picked up the pace and from then on I was utterly engrossed.  If you love historical fiction with a big dollop of romance then this is the book for you.

Eve Edwards next book, 'The Queen's Lady' is out in Spring 2011 and focuses on the Lacey Brothers.  Here's a peak at the lovely cover: 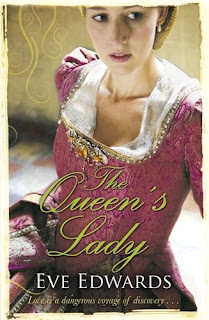