Review: Out For Blood - Alyxandra Harvey

Out For Blood (The Drake Chronicles #3) by Alyxandra Harvey, published by Bloomsbury in 2010

Goodreads synopsis:
Hunter Wild is the youngest in a long line of elite vampire hunters, a legacy that is both a blessing and a curse at the secret Helios-Ra Academy, where she excels at just about everything. Thanks to her friendship with Kieran Black, Hunter receives a special invitation to attend the coronation of Helena Drake, and for the first time, she sees the difference between vampires that must be hunted and vampires that can become friends—or even more. When students at the academy fall victim to a mysterious illness, Hunter suspects they are under attack from within. She will need someone she can trust to help her save the future of Helios-Ra . . . help that shockingly comes in the form of Quinn Drake, a drop-dead gorgeous vampire. Who said senior year would be easy? 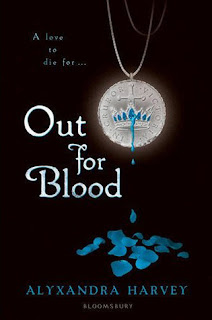 Hunter Wild is a student at the Helios-Ra academy, where she's being trained in the art of hunting vampires.  She is fast, strong, beautiful and intelligent but needs all her wits and cunning to figure out what's afflicting her fellow students when they all mysteriously start becoming ill.  Her grandfather, who raised her after the death of her parents, has taught her that vampires are the enemy and must be stopped at all costs, but when she meets Quinn Drake, up close and in person, she starts developing a whole new set of feelings about vampires - of which her grandfather would most definitely not approve!

This was definitely my favourite installment in the series so far.  I loved the character of Hunter who's definitely someone you'd want fighting on your side and I liked the fact that a lot of the plot took place in the school.  The story alternates between Hunter's narrative and Quinn's and I liked seeing how they both coped with their new-found feelings for each other.  Quinn has always had a reputation for having an eye for the ladies, but when he meets Hunter and their relationship starts to develop romantically, he has to adjust to being a one-woman vampire.  I thought their romance was brilliantly written and the scenes between the two of them were very natural and realistic.

I also liked the fact that we got to see the vampires being afraid for the humans around them and struggling with their emotions and natural instinct for blood.  They have to weigh up their own feelings, against what will keep the people they love safe - even if that means keeping them as far away from them as possible.

Many featured characters from throughout the series were also part of the book, including Logan and Isabeau, Nicholas and Lucy and Kieran and Solange.  It was nice seeing some familiar faces again and revisiting old friends.  I love Nicholas and Lucy so much - I want to see more of them.

I read somewhere that the next book's going to be based around Quinn's twin brother Connor, who I think would be perfect for Chloe as they're both computer geniuses.  It's due to be published in 2011.  This is such a fantastic series and I can't sing its praises enough.  I don't know how many books Alyxandra Harvey has planned but I hope she goes on and on and on!

Thanks to Bloomsbury for sending me this book for review
Posted by Samantha (A Dream of Books) at 12:10