Crusade by Linda Press Wulf, published by Bloomsbury in January 2011

Goodreads synopsis:
Robert: Left on the steps of a church as a baby, Robert was often hungry but never stole food like the other orphans in town. Introverted and extraordinarily intelligent, he knew all the Latin prayers and hymns by heart by the time he was five years old. Georgette: Her own mother died in childbirth, leaving Georgette with a father who, seventeen at the time, had neither experience nor aptitude as a nurturing parent, and a brother known in town as Le Fuer - The Spitfire - for his terrible temper. Perhaps to replace something missing from their own lives, both Robert and Georgette are drawn to the news of a crusader, twelve or thirteen, no older than themselves, travelling down through France with thousands of followers - all, unbelievably, children too. Of those thousands, this is the incredible story of two. This is a story of hardship, loss and love. 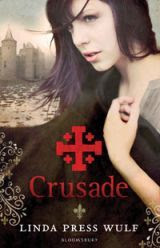 Review:
I received an uncorrected proof copy of this book which has a plain red cover with a very simple design.  I have to just start by saying that I've posted the actual cover of 'Crusade' which I think is absolutely gorgeous.  The girl on the front has a lovely face and I really like the overall design.  I think this is definitely going to stand out on the shelves.

'Crusade' tells the story of the Children's Crusade in France, 1212.  There are a number of different versions of what actually took place, but Linda Press Wulf has written a beautifully evocative re-telling of one particular version of events.  History buffs will love this book and for those, like me, that didn't really know anything about the Crusade, then this is an opportunity to enjoy a wonderful story as well as fill in some of those gaps in knowledge.

Press Wulf has created two fictional characters who guide the reader through the events of the book: Georgette, a peasant girl and Robert, an orphan who was adopted by the Abbey when he was just a small boy.  They are brought together on a shared journey to the Holy Lands, by a young boy called Stephen, who is gathering children to lead on a crusade to Jerusalem, where he prophecises that they will be able to peacefully persuade the Muslims to convert to Christianity.  Georgette and her brother Gregor, along with a band of children from their village, set off with Stephen, believing that they are on a mission to carry out the work of God.  They are joined by Robert, who has become disillusioned at the Abbey and is seeking a higher purpose in life.

The story follows them on their journey through extreme hardship and hunger, sickness and poverty.  Some of the things that the children have to face are heart-breaking and several times I felt very emotional reading it and imagining what they had to go through.  At one point in the story, the older children have to leave the younger ones behind as they're too weak to go on.  I can only imagine what they must have felt having to abandon their siblings and friends.

Eventually Georgette and Robert do meet and I enjoyed seeing how their two stories merged.  My only criticism would be that I would have liked to have followed them further, as in a way it seemed the book finished just as their story was getting started.  However, their relationship is very sweet and touching and I was glad that they eventually did find each other.

Overall, I thought that this was a fantastic account of a significant event in Medieval history.  It's informative and educational, but also a really moving read that was both touching and poignant and beautifully written.

This one's published in January 2011 so add it to your wishlist now!

Thank you to Bloomsbury for sending this one for review
Posted by Samantha (A Dream of Books) at 12:57